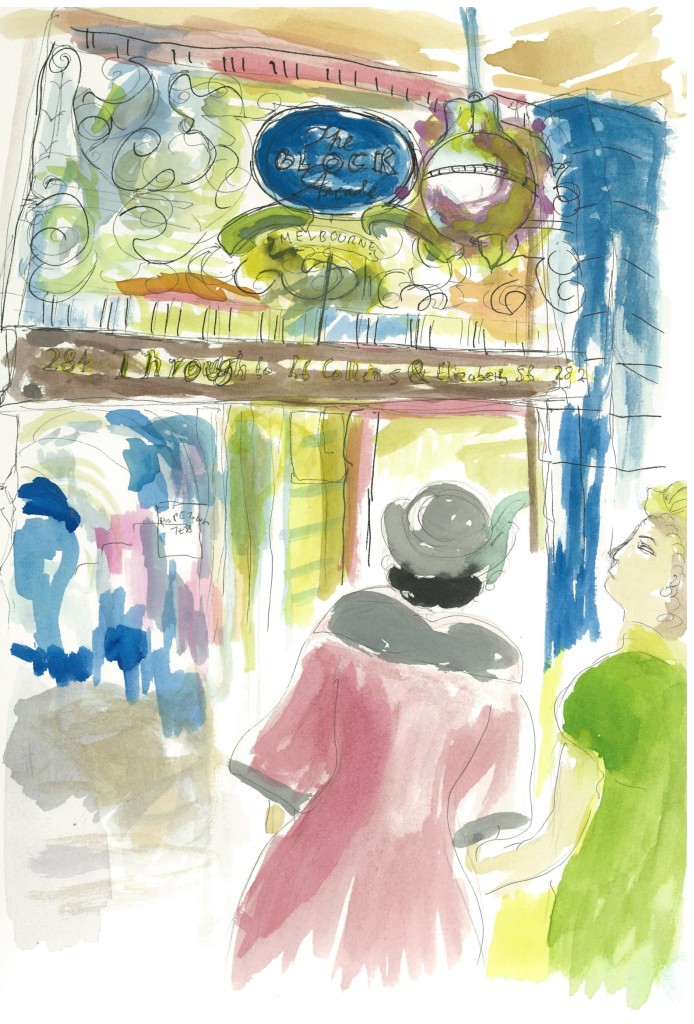 The women stand outside Block Arcade, while you hover beside them, hoping you’re still invisible. The streets are much emptier in 1945, and that means you would stand out even more in your 2017 clothes if they could see you! The Block Arcade is, like so many things in Melbourne, a mix of styles. Through the glass doors you can see its luxurious-looking Victorian-style shop fronts, but the mosaic tiling below could be something from an ancient Roman villa. Exactly above the women’s heads hangs a round white lamp.

“Hopetown Tearooms?” The taller woman asks. “I can think better over coffee.” The other woman nods slowly, and then, with sudden, savage speed, rips off her golden deer pin.

“Maybe even some cake?” Her friend is clearly trying to ignore her anger and get her inside, but the shorter woman drops the pin on the ground and puts her heel on it for a moment. Then she steps away, sobbing.

“What are you doing? You shouldn’t do that in public! What if they see you? The Golden Deer have eyes everywhere…” The woman picks the pin and refastens it on her friend’s coat. Her friend pushes her hand away.

“No. I don’t want to do this anymore. I just don’t. Why can’t we…” she lowers her voice. “Why can’t we break away from them? Let’s start our own organisation of magicians – ones who practice good magic, and fight The Golden Deer’s use of dark magic?”

The light above them begins to wobble gently. Your eye is drawn up towards it.

The taller woman shakes her head. “And how would we know if what we’re doing is dark magic? For example, I’m making that lamp wobble above our heads. So what? Is that dark magic?”

The shorter woman is silent. “I don’t know. But I don’t want to do this anymore.”

“They kill whoever betrays them, you know,” her friend says, sounding sad. “They have a strange method for it – the bodies disappear. And they got the idea of shooting with an arrow from the Ramayana. You know, the two princes who are expert archers, and kill evil demons with their arrows. It’s The Golden Deer’s version of dark humour.”

Maricha the Magician’s body was shot with an arrow, you realise. The mystery is solved – The Golden Deer is some creepy occult organisation, who went after him, although of course they can’t really do magic…

Crash! The lamp drops onto the taller woman’s head, and she falls down, and becomes horribly still.

Was it her own magic that killed her?

More importantly, as the shorter woman screams, and bends over her friend’s body, you look around, and a cold sickness creeps over you. Yes, the mystery is solved.

But you’re in the past! Desperately, you kneel beside the shorter woman, trying not to look at the still face of her friend. “Excuse me…” But she can’t hear you. What are you going to do? You get up, hands in coat pocket. That’s when you feel the golden deer pin, and clutch onto it miserably. The woman gives a shriek.

“Who are you?” She cries, standing up as well. The deer pin burns under your hand. Touching it has made you visible! You pull out the golden deer pin and her eyes widen.

“I’m a friend,” you say. “From the future. I was trying to solve the mystery of the murder of Maricha the Magician, and got mixed up in magic that brought me back here. I believe it was The Golden Deer who killed him.”

She gasps. “Maricha! Living so long, he had to have been so powerful… and they killed him? They’re still operating, still committing crimes even in the future?”

Something audacious but brilliant has occurred to you. “Maybe we can warn him! And work together to get rid of The Golden Deer in the past…” You rub your hands together excitedly.

“Before it continues into the future,” she finishes slowly, looking over at her friend’s body. She takes a deep, shuddering breath and nods. “I want to make up for helping them in their work.” She holds out her hand and you shake it.

“Surpanakha,” she says. “Surpanakha Ayodhya. Nice to meet you. But first things first…” She looks you up and down. “We’d better get you some proper clothing!”