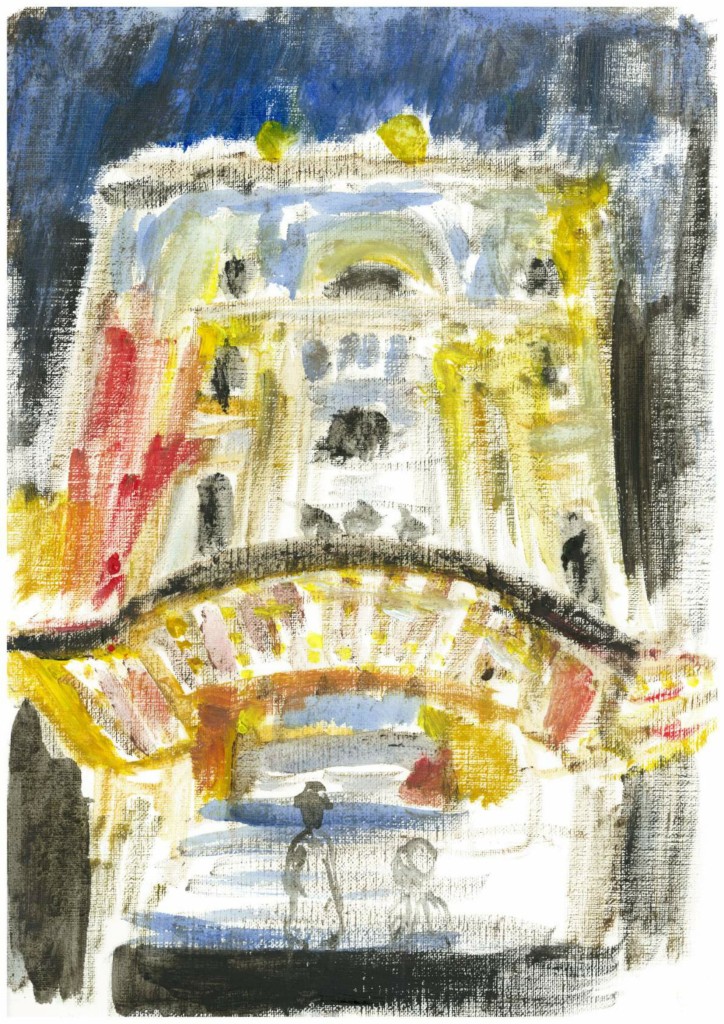 There’s an angry crowd at the top of the theatre steps, as you chug up. A man in a bow-tie who seems to be the manager, stands there as well, trying to pacify them.

“I’m sorry, ladies and gentleman, but there is nothing I can do! Maricha the Magician seems to have simply disappeared. He can be extremely unpredictable. We will refund your money…”

You turn away, disappointed, and stand dismally, uselessly, in the street, hands in your pockets. You should have followed the women. And just how are you going to get back? Stuck in the forties and nothing to show for it!

“Set it on fire.” Who was that? Nobody! Nobody’s there. You look around you, but you can still hear them. Are they invisible?

“If you wish to prove that you are still loyal to our great society, then set the theatre on fire. Tonight.” You can’t tell if it’s a man or woman speaking. Why does that voice sound familiar?

“I don’t like it. I don’t like it at all.” A second voice, definitely a man’s, with a touch of an accent. “What we do isn’t just magic anymore. It’s… evil. Pursuing power for its own sake, driving ourselves into darker and darker regions of the soul.”

“What’s wrong with power, Maricha, hmmm? Power is meant to be used. You seem to like the idea of living forever well enough. And I warn you…”  The voice turns sinister. “If you try to undermine The Golden Deer, we will punish you for it.”

Something occurs to you. Why can you hear them?

“Because I made it so you could.” The world has gone black, and then back to light again: like a stage dimming, then the lights turning on for the next scene. The street you’re standing in is back in 2017. Cars parked along the street, the green-and-white trams trundling past.

“I don’t want to kill you. I showed you what happened, so you’d stop looking for answers. Maricha died for his revolt against us, but he was right. We of The Golden Deer were doing distasteful things.” A sigh. “But that doesn’t mean we are evil.”

You find your voice, wincing as it squeaks with fear. “And if I tell the police? Or anyone?” They take their glasses off and you step back. You don’t know what you were expecting. Red glowing eyes, skeletal features? But no, it’s an ordinary face, still hard to identify as man or woman – strong cheekbones, thick eyebrows.

“You want to make your career as a PI?” He/she asks. “I can help you. Any other case. Just text me, and I’ll find out all the things people keep hidden. If you keep quiet about this one case, your career as a PI is set.” A knowing smile. “That’s what you came to this city for, wasn’t it?”

You’re silent, your head spinning. Then you say, quietly. “Okay. We have a deal. I’ll be in touch.”

“Glad to hear it.” Hat and Glasses puts the glasses back on, turns away, and disappears. Leaving you feeling both sick and triumphant…