Don’t forget to follow the map all the way to the red pin at Degraves Street! Sometimes the GPS triggers early, and you don’t want to miss the awesome story location below… 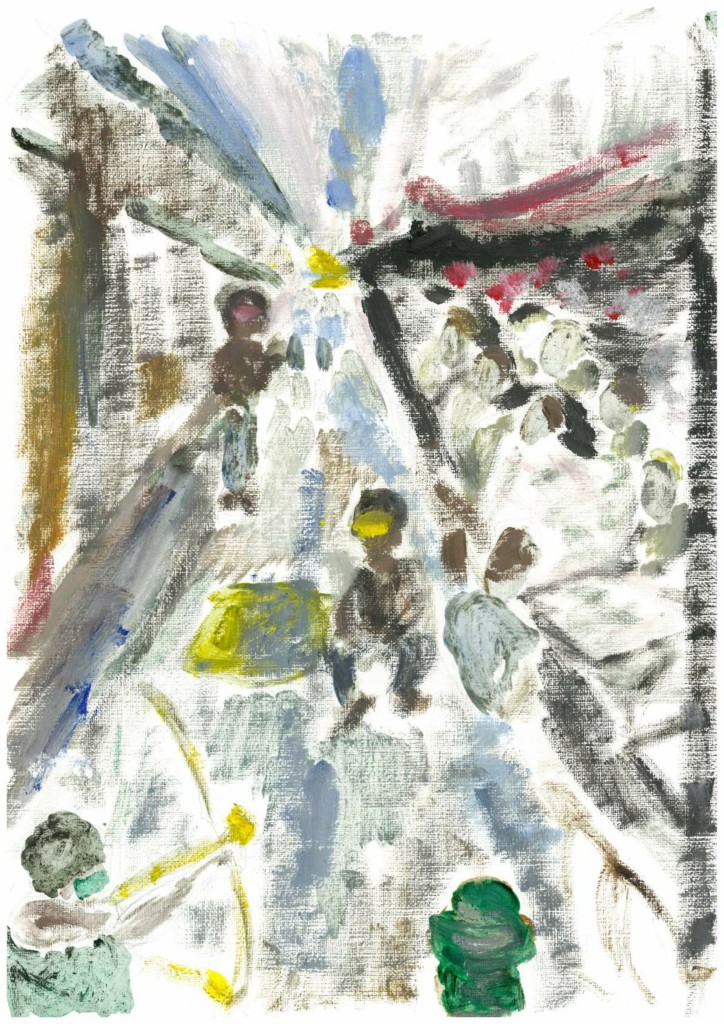 Degraves Street is so narrow that you wonder why anyone would choose to do a street performance here. But the people sitting at the tables having coffee look around with interest as the actors, all wearing street clothes except for different-coloured masks, assemble at the opening of the lane, while you and the rest of the small crowd that they drummed up stand on the corner of Flinders Lane and Degraves Street.

“The Ramayana is a story of power,” one of the actors announces, standing on an empty chair. He’s tall and strongly built, in a glittery green mask.

“In this first scene of our performance, Prince Rama and Princess Sita, who were to be rightfully crowned king and queen of Ayodhya, have been exiled to the forest with Rama’s brother Prince Lakshman. But then comes the Golden Deer, come to lure the brothers away on a hunt so Sita can be kidnapped by the demon-king Ravana!” He jumps down again. The Golden Deer! Your ears prick up as you remember your informant’s words.

The actor who plays the Golden Deer whirls and leaps to music from an iPod, wearing a golden mask.

The actor playing Prince Rama, the one in the green mask, chases the Golden Deer, a toy plastic bow in his hand, but then stops and shouts theatrically, “It’s no Golden Deer, it’s the sorcerer Maricha, who works for the demon-king!” You jump. Maricha? The name of the dead man!

A plastic arrow goes whistling past your ear. You’re not sure what’s happening here, but it’s obviously part of the performance. “Ahhh!” The actor playing the deer is really good – his cry of pain is bloodcurdlingly real-sounding.

But then the young woman in the red mask who played Princess Sita screams, high and piercing, and rushes forward. “He’s been shot! He’s really been shot!” Someone shoves you aside and runs past. The actor who played Prince Rama! He’s getting away, in the confusion and panic that’s sweeping through the crowd.

“Someone help me!” Red Mask screams. That sets everyone else shouting and shrieking.

“Someone call 000!” you shout, pushing your way through the crowd and clumsily flashing your shiny PI badge (which you printed off the Internet and laminated yourself) down at the kneeling woman and the supine actor. You turn around to see if anyone heard you – yes, someone is dialling on their mobile phone. But when you turn back, your stomach lurches.

The wounded man, who was a second ago lying right there on the cobblestones of Degraves Street, has gone. Red Mask stands and you stare at each other. “So he’s back,” she says at last.

“Who’s back?” You ask and she shakes her head, putting a finger to her lips. “Not here. I can tell you more after, but first… the show must go on!” She shouts over the heads of the crowd, who look unperturbed, almost as if the shooting never happened…

“Next scene, McKillop Street!” The crowd and her fellow actors cheer and clap.

That’s when you see that the guy who shot the ‘deer’ is back, hovering behind the crowd, his face looking panicked. His eyes meet yours and he turns and runs, going right on Flinders Lane.

McKillop Street: Follow the troupe to their next scene, and find out exactly what it is Red Mask knows? Shaken, you follow them left up Flinders Lane, right onto Elizabeth Street, left onto Little Collins Street and right onto McKillop Street. You try to have a word with Red Mask, but she and the other actors sing and dance as they go, ignoring you.

Manchester Unity Building: Chase the guy who shot the arrow: he has to be the killer of the human Maricha as well, doesn’t he? And you could have the credit of catching him yourself! So you run in the opposite direction down Flinders Lane. You can see his black t-shirt turning left onto Swanston Street and you pump your arms and legs harder. He’s tiring, so you can keep him in your sights as he runs down Swanston and then turns left onto Collins Street. He finally skids to a stop outside the Manchester Unity Building.