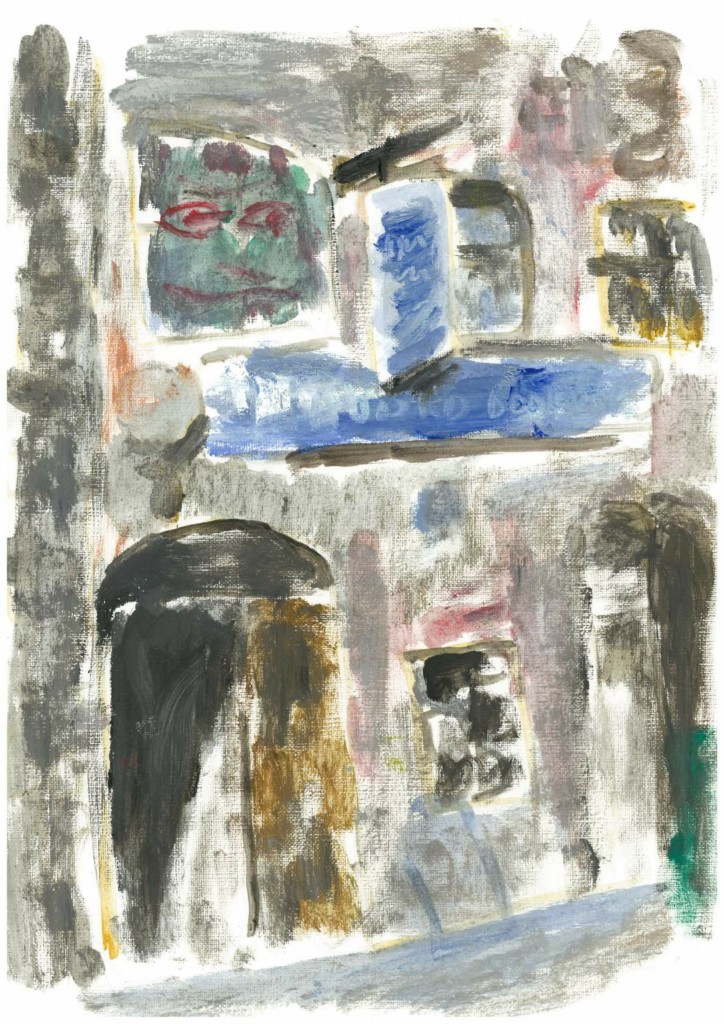 McKillop Street is rather drab and dull, compared to the bustle of Degraves Street, but at least there’s more room. The actors stand in front of the Haunted Bookshop (Paranormal and Mystical studies!?) and Red Mask takes over as the narrator. Nobody seems to care about the disappearance of the Golden Deer actor or the escape of the Rama actor who shot them.

“In this scene, the demon-king Ravana comes to kidnap Princess Sita. Prince Lakshman has gone to look for his brother, so Sita is alone. Ravana comes disguised as an old, poor holy man begging for alms, and he kidnaps her…”

Red Mask becomes Princess Sita who paces, worried about her husband and brother-in-law, frustrated that she has to stay behind. Then the actor playing Ravana, who wears a purple mask, limps forward.

“Give me alms, gentle lady.”

As Sita offers him imaginary alms, he changes into his true demonic form, which the actor depicts through ripping off his mask and howling with glee.

Sita kicks Ravana in the groin, and the crowd gasps and claps. Ravana howls again, this time in rage.

“I summon the…” he begins, but she interrupts him.

“No I summon the great dark powers of the demons!” She pulls something out of a pocket – a pin shaped like a golden deer. And that’s when you know that magic is real because – oh god, SOMETHING has just floated out of one of the Haunted Bookshop’s top windows! It’s got transparent green skin and big glowing red eyes, and it is definitely not friendly.

You try not to scream, and are surprised that the rest of the crowd are so self-controlled as well. You look around and not one of them is looking at the green thing that is floating above Red Mask and Purple Mask. How come you’re the only one who can see it?

Oh no. Oh no. The crowd isn’t there anymore! Neither are the other actors. It’s just you, Red Mask, Purple Mask and the green thing.

“I’m impressed,” says Purple Mask, grinning at Red Mask. She grins back. Then they both turn to you. You should run. But you can’t. Your legs feel like blocks of lead.

“What happened to everyone else?” You croak, and they laugh.

“We lured you here on purpose, idiot,” says Red Mask. “To the place in Melbourne where it’s easiest to summon dark powers. We know you’re sniffing around Maricha’s death, and we’re here to tell you that you’ve sniffed quite enough. The Golden Deer is a great society, and a great society should not have to answer to laws. What we do to our own members is our own business!”

You are ready to vomit now. So magic is real, and so are secret societies – and this one murdered Maricha the Magician!

“I don’t think so,” Purple Mask counters and turns to you, spreading his arms out dramatically. “Come with me. I’ll train you to be a great magician; you’ll move up the ranks in no time. I’m older than her, and I’ve been a member for longer so I have TWO pins!” He pulls two gold pins shaped like deer out of his pocket and holds them up, eyes glinting “I have access to powers, secret powers, she doesn’t. I’m willing to share them.”

“I’ve got way more finesse though,” Red Mask argues, and, coming closer, points a finger shrewdly at you. “And I’ve got a mission that will appeal to you – one that’s all about fighting injustice in this town. Come with me, little PI, and I’ll teach you to change the world while learning some really cool stuff!” They look at you expectantly. This just got very weird.

“If you don’t, we’ll get the green thing to kill you,” they say together.

Neither choice looks good, but you have to choose.

Bank Place: Follow Red Mask? A justice-fighting mission sounds okay – it could even be satisfying. Follow her, legs shaking a little, as she marches back down McKillop Street, right onto Little Collins Street and then left onto Bank Place.

Niagara Lane: Decide you want to get your hands on some secret powers? Red Mask didn’t deny Purple Mask had access to those! When else are you going to get an offer like this? So you follow Purple Mask, who starts telling you a boring story about his pet cats as he ambles up the opposite end of McKillop Street, turns right onto Bourke Street, left onto Hardware Lane, right onto Little Bourke Street and left onto Niagara Lane.