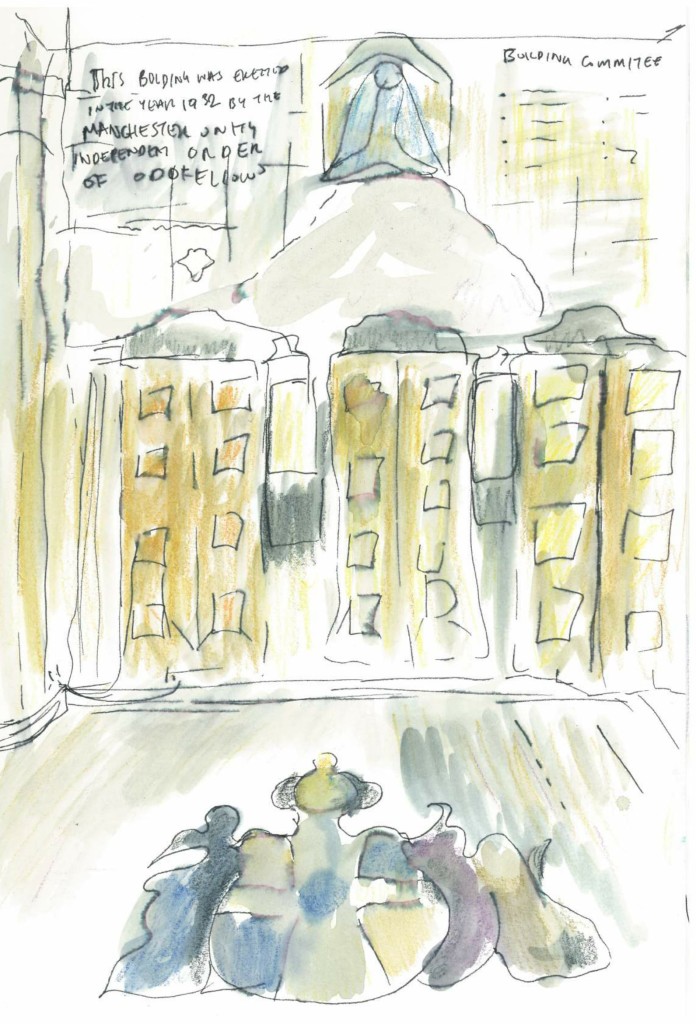 You watch as the actor goes into the entranceway of the building, which has a staircase in the middle. The floor is tiled in white mosaics, with brightly coloured mosaic circles set into it, each with the letter M. On the walls are strange images, carved on black stone. You can’t quite read what they say, but the actor is looking intently at one of them, so you creep closer, squinting. The pictures, of ancient-looking naked men and women carved in white on the black look slightly ridiculous in this setting – through the glass doors into the lobby is a café, and bronze-coloured old-fashioned lifts are set into the far wall.

The image the actor gazes at is that of a muscled man apparently rescuing a woman holding a baby from flames. Underneath is written… Protection? No, Fire Protection. You roll your eyes a little at the sexism, and then tap the guy on the shoulder. “Excuse me!”

He swings around, fists up. “What do you want? Were you following me?”

“Yes…” You notice then that he’s got the bow slung over one shoulder still, the arrow sticking out of his waistband. You swallow. You’re not keen on being shot, and still less keen on disappearing – like the Maricha actor in the street, like the real Maricha. “I saw what happened back there, in Degraves Street. You wounded your colleague, the one playing the Golden Deer, so I left the performance to follow you…”

“Yeah, well, you’re lucky you didn’t go with them. I think they had plans for you…” Tears suddenly glisten in his eyes. “I didn’t want to do it.” He sucks in a breath. “They made me. Are you going to call the police?”

“I’m a PI,” you say, hoping you sound important. “I’m investigating the Maricha the Magician case.”

His jaw drops open. “How do you even remember that? We wiped the memories of everyone in the city!”

“We?” You stare, but he’s thrown his bow and arrow to the ground and is kneeling in front of you.

“You must be very powerful to be able to see through such a great working of magic! Great One, please accept me as your apprentice! I wish to leave the Order of The Golden Deer. They’re murderers, and I don’t want to be one of them anymore.”

So this order murdered Maricha! Shot him with a magic arrow that made both body and arrow disappear.

“Oh, Great One… please, please accept me as your new apprentice!” He says again, wincing from the pain of kneeling.

“Get up! I don’t know any magic!” But you feel a little pleased. Maybe you do. Actually, come to think of it, you must! How else could YOU not have been memory-wiped, like the rest of the city?

Someone coughs behind you and it’s your turn to jump. To your relief, it’s your informant, still in their big hat and glasses and slouchy overcoat. Before you can say “hello”, they point through the glass doors into the lobby.

“This was originally the headquarters of the Independent Order of Odd Fellows, built in 1932,” your informant announces.

“So you can speak normally,” you say, relieved. You can see a colourful emblem set into the marble floor, through the doors – a shield with a Latin motto. You squint but you can’t quite make it out… and then you jump again as Hat and Glasses intones spookily:

Will you champion the one and fight the other

Or will you too prove to be a dark magic lover?

Before you can retort that you have no intention of becoming a dark magic practitioner, Hat and Glasses says, “Great power, unimaginable power, could be yours – if you choose it – in Union Lane!” A skidding sound makes you turn around. The green-masked Rama actor has run away again – presumably to Union Lane! So much for being your apprentice. You want to run after him again – why should he get the great power for himself? But a sense of responsibility makes you stop.

“What are we going to do about the Maricha case?” you ask your informant.

“That’s up to you. You can find the answer to stripping The Golden Deer of their power once and for all if you come with me. Or if you wish to try for power beyond compare, go to Union Lane,” they answer casually, as if it’s an easy choice. Then they add in an ominous tone: “Choose wisely.”

Union Lane: Decide unimaginable power is worth having a crack at? You’ve clearly got some magical aptitude, since you’ve been able to see through The Golden Deer’s spell. If you become all-powerful like your informant promises, no secret will be hidden to you… you could become the greatest (not to mention wealthiest) detective in all Australia! So you turn and make a tearing left onto Swanston, run along it and make a left at Little Collins St, then make a right into Union Lane.

Hat and Glasses: Decide to finish the case? That’s what you came to this town to do after all: to solve unsolved mysteries, see justice done, and become known all over Australia as the PI who doesn’t rest until a case is closed. Hat and Glasses’ advice to choose wisely has gotten to you, too. What could be wiser than solving this mystery? So you follow Hat and Glasses, who turns left onto Swanston Street, makes a left at Capitol Arcade, a right at Howey Place, and a right at Presgrave Place.