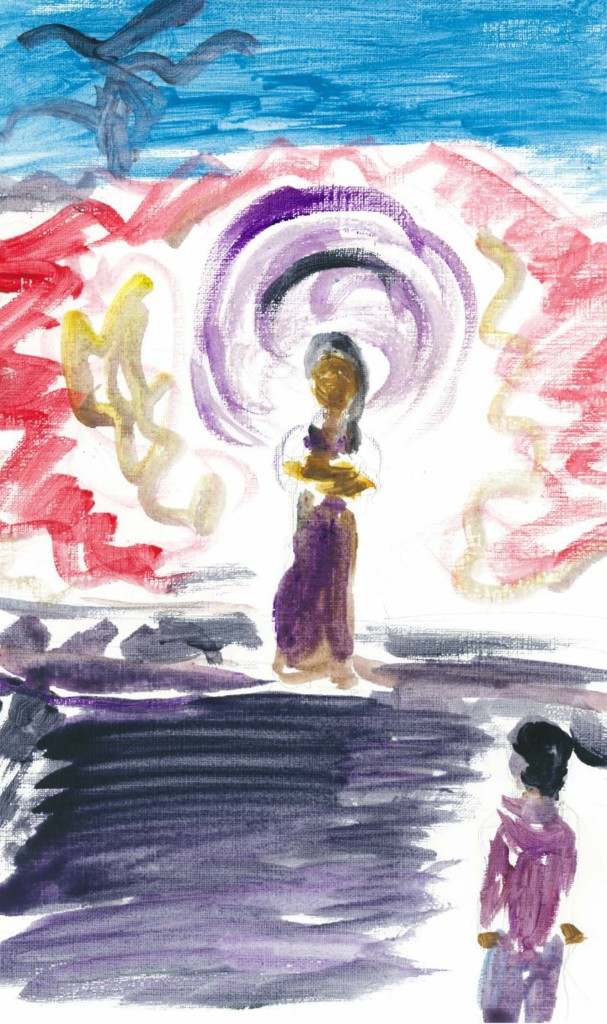 You’ve followed the couple to Hosier Lane and eavesdrop on them, standing around the corner. Graffiti stretches down the lane, colourful, hard-edged, compelling.

“Sita, listen to me! It’s an amazing organisation…”

“Amazing? Amazingly evil, you mean.” Her voice is bitter as she picks up a can out of her bucket and shakes it. She begins to spray bright blue paint over the walls. “And responsible for murder!”

That makes you start.

“He was a traitor, he was better off dead. Me and Lakshman know that! He was trying to change destiny.” Ram sounds furious.

“You and destiny! I should never have agreed to move here to Melbourne with you! Curse you and The Golden Deer!” Sita spits.

You step around the corner and confront them. “I’m a PI,” you flash your badge and try to seem authoritative. “And I’m investigating the death of Maricha the Magician.”

Ram stares at you. He’s a very nervous-looking young man.

“What did you mean just now, when you said that Maricha was a traitor? Traitor to what?”

He’s silent, while Sita sprays furiously around a group of circular portraits of cross-looking men.

Ram finally replies. “He wasn’t a good man. He did bad things…” He clears his throat. “I’m actually meeting my brother in Royal Arcade for lunch now. He was one of the police officers investigating the case. You can come with me if you like and talk to him.”

You become excited. “That would be excellent. None of the police have been willing to talk to me – in fact, it’s like they’ve forgotten all about the case!”

Sita stops spraying. “If you know what’s good for you, don’t trust Ram or his brother!”

Ram swears and pulls something from his pocket. It’s an arrow made of plastic and rubber and it looks harmless enough, but Sita says quietly, “Don’t you point that thing at me.” She looks disgusted. “It really is over, Ram. I’ve had enough of following you on your crusade for power.” To your amazement, she shakes her spray can and a portal opens in the graffitied wall, swirling darkness spotted with bright sparks like bits of spray paint. She looks at you grimly. “I think you should come with me. Otherwise I can’t say what they’ll drag you into.”

Your head is spinning. Magic. It’s real. It’s right in front of you!

“She’s just angry with me for insisting we move to Melbourne,” Ram says calmly, as if he’s known all along that Sita is some kind of spray-painting sorcerer. “Here.” He pulls out his phone and clicks quickly, then holds it up. It’s the Victoria Police website, and he’s got up a photo of a man who looks a lot like him, only with curlier hair and a fiercer expression. Under it: Senior Constable Lakshman Ayodhya. “I’m not lying to you. And you can see that she’s the one dabbling in strange things.”

“Last chance,” Sita says to you. She puts one foot into the portal.

Magic and Investigation: Go with Sita? She’s obviously got amazing powers and she seems genuinely disturbed by Ram, so he could be dangerous. You climb in the portal after her. The portal takes you left onto Flinders, right onto Regent Place, and left onto Collins Street, through to the Waterwall on the corner of Collins and Swanston.

Under the Clock: Go with Ram to meet his brother at Royal Arcade? He seems like a normal guy, and how do you know Sita’s magic isn’t malevolent? The whole portal thing is pretty scary. And Ram was telling the truth about his brother being a police officer, right? He has to be trustworthy. So you walk up Hosier Lane towards Flinders Lane, turn left onto it, then right onto Swanston Street, left onto Bourke Street Mall, and enter Royal Arcade on the left side. (You can also catch the tram from Flinders Street, stop 13. Walk away from Flinders Lane down Hosier Lane, turn right onto Flinders Street, and left onto St Kilda Road. Catch any tram going up Swanston and away from Flinders Street. Get off at Stop 6, Town Hall/Collins Street, and turn left on to Bourke Street Mall).