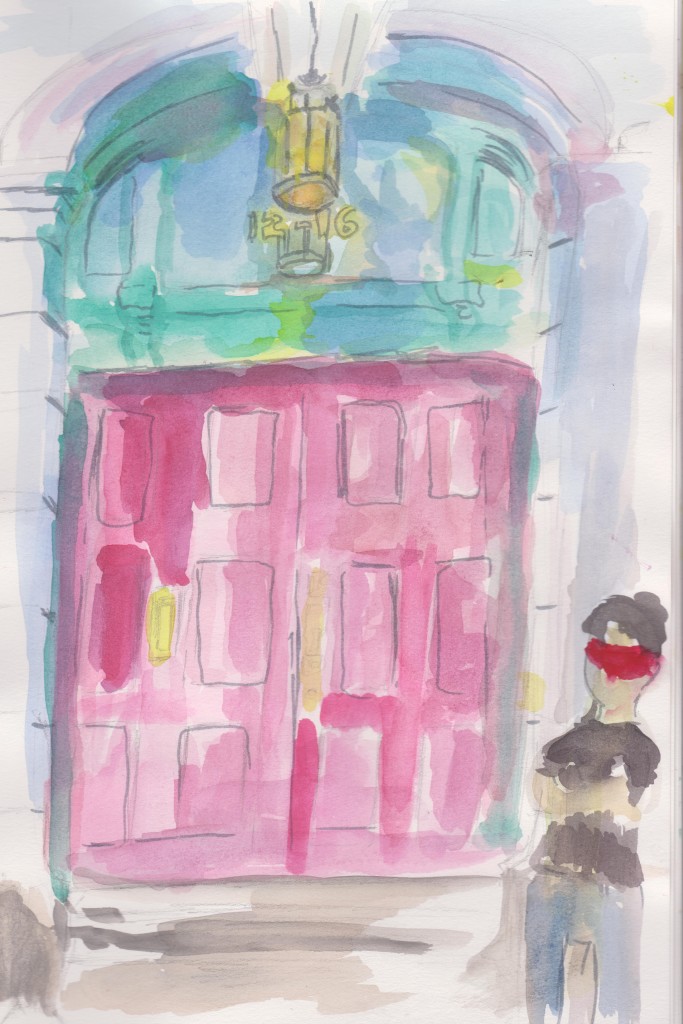 Right away you notice the spikily ornate old-fashioned lamps in Bank Place. They look sharp. You swallow.

“Come, minion.” Red Mask leads you further in and you look hopefully at the people around you, but she smiles. “Don’t even think about it. The moment you try, you’re dead!” You’re already regretting this choice: somehow, being willing to murder people doesn’t really fit your idea of someone who rights wrongs!

You’re now facing 12 Bank Place, a rather mysterious-looking building with a balcony topped by white urns, and with a red door flanked by strangely shaped pillars.

“This,” says Red Mask, “is the headquarters of the Melbourne Savage Club, a gentleman’s club started in the 19th century, although they moved in here in the 1920s. They are a vile sexist organisation, men-only, unlike The Golden Deer! We are so much more enlightened. You’re lucky to be considered for membership with us, even minion-membership… you’re lucky you found The Golden Deer.”

Oh yes, you feel very lucky right now! Then it hits you.

Your left pocket! You have a golden deer pin there! You pull it out and brandish it at Red Mask, whose jaw drops.

“Where did you get that?”

You wave the pin wildly and one of the lamps comes off its post! With a shriek of fury Red Mask pulls her own pin out, and another spiky lamp comes off. You hurl your lamps at each other, and they fight in the air. Shouts come from the street – people can see this alright!

You shout as well, because her lamp has shoved yours out of the way and knocks you on the head. Your shout dies on your lips. So do you. What a way to go, eh?