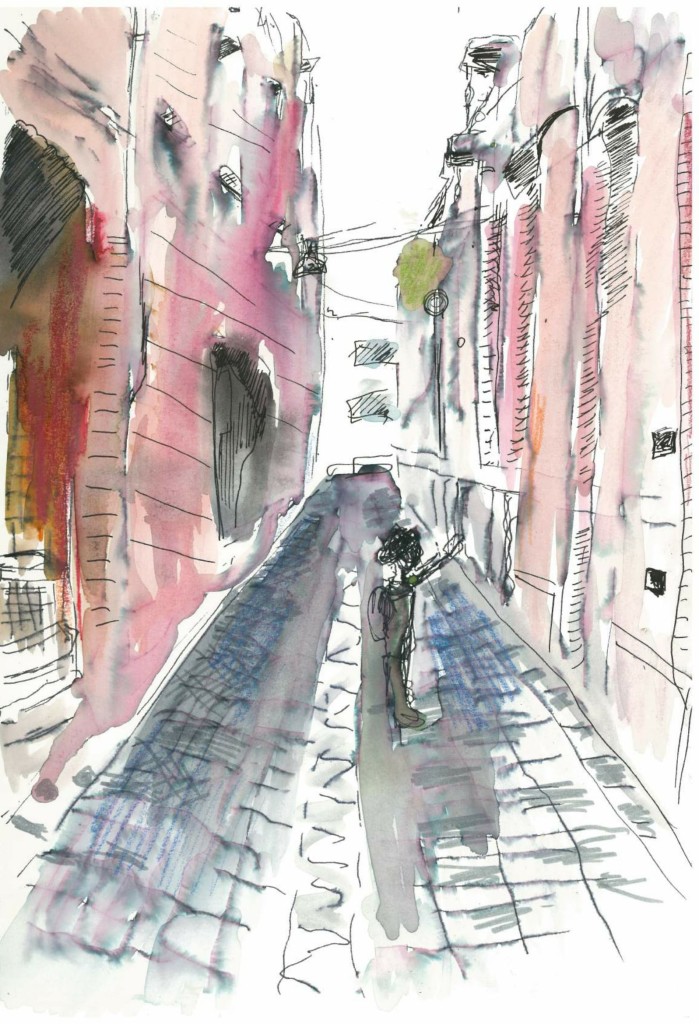 Niagara Lane’s narrow cobblestones feel a little slippery. Rough red brick walls press in around you. Purple Mask turns to face you, and looks you over. “I am willing to induct you into the great, powerful society of The Golden Deer, but first you must prove yourself worthy.” He gestures at the walls of the alley, eyes glinting threateningly. You suddenly find yourself desperately wanting to be worthy.

“These were warehouses in the 1880s. You can still see the barrel hoists.” He points up and you see them, like hanging spindles, dangling in front of arched, barred windows. Then he claps his hands and a barrel appears there.

“If you wear my pin, you will have some of my power, temporarily of course. The test is this: one of loyalty. That barrel is invisible to anyone but you or me. The next person who walks into this alley – clap your hands and make the barrel drop on them. Just because I told you to!”

Horror curls through you, but you’re taking his pin from him. The sane voice in you tells you, frantically, to stop. But you can’t stop. Anyway, he’ll just kill you, won’t he?

The pin is burning as you fasten it to your coat, and with a sudden rush of blood you can feel the power buzzing in your veins. You don’t want to let this feeling go. Ever. But can you really kill someone to keep it?

The alley is empty, but soon an old man with a camera comes in and begins to take photos. You stare at him, and he looks curiously from you to Purple Mask.

“Do it,” says Purple Mask. “Or else I’ll get bored, and you know what that means!” You do know, but he draws his finger smoothly across his throat anyway.

The man takes a photo, clearly deciding to ignore you. He comes closer. He’s almost under the barrel now.

You take a deep breath and look down, putting your hand on your left pocket, which feels warm. That’s when you remember – the golden pin you were given at Fed Square! You take it out, and now you’re more powerful than Purple Mask. You have two pins!

“Where did you get that?” He gasps.

You clap your hands, and the barrel disappears.

“Traitor! Give me the pin!” But you clap your hands again, a pin in each one, feeling the power flow through your fingers. There’s a cracking sound, a flash of purple-and-gold light, and Purple Mask is knocked unconscious. You’ve caught one criminal, at least.

Time to call the police! And reassure the old man, who’s on the ground, whimpering with fright.